I settled for years. I allowed myself to, really. For a lackluster marriage I had no business saying yes to. For working for less than I was worth — barely able to scrape by. Working for an unstable boss hell bent on tearing us all down to his level.


I was plodding along until I could no longer pretend I was happy. It became too much effort and frankly, I was over it. While I had a smile on my face, if you had looked closely, you would have seen it didn’t quite reach my eyes. I looked around at what settling in life had gotten me, and it was a sliver of how I knew I could be living.

It wasn’t about a new handbag or how big my apartment was, it was much more than that. It was about me truly being my best version of Robyn. And I wasn’t hitting the mark, not by a long shot.

I left that job, got clear about what I wanted, and eventually left the States to travel and live in Italy.


It wasn’t easy and I had no clue what I was doing much of the time, but nothing is more scary than settling. Not even the fear of the unknown at 4 am.

Here’s the point  — I finally woke up with startling clarity, but, what about you? The small talk you’re sick to death of, or the boredom you’re feeling while at a Wednesday happy hour? I know that feeling all too well. The degree you’ve always wanted, or the move you’ve been pondering for far too long, it’s not going to go away. The need to make your life unapologetically your own is going to keep whispering in your ear until it begins shouting.

You can shove it down or try and distract yourself with mindless scrolling watching other people live their lives, but it’s all temporary.

Rather than working hard pretending you’re happy, why not get real about what you’re not happy with and make changes? I think of it as Making Gold. It’s about beginning from where you are. Getting clear about what’s not working in your life, making a plan, and doing something about it.

Maybe you know what you want and you’re ready to make big moves, but you need a plan and some accountability. Ask yourself, what if this time were different? What if I did the thing I think about all the time but talk myself out of? What. If.

I asked myself this very question years ago. And then did the damn thing. When you’re ready, I’ll be here.

Are you Showing Up for Someone Else’s Game? Get Access to The Workshop and Make Your Own Rules!

I call it showing up for someone else’s game. Regardless of the name, it feels like you’re checking off a cookie cutter list of items you feel like you have to. They feel heavy and filled with expectation and just plain not you.

But guess what? — You Don’t Have To. I’ve recorded a workshop teaching you step by step how to identify what’s not working and create your OWN rules on how to live your life. Grab your journal and a favorite pen because we’re about to throw out what’s not working for you and rewrite the rules! 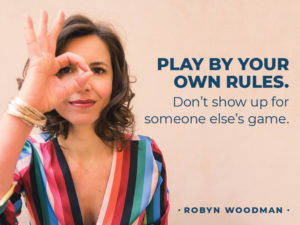 Yes! I Want The Workshop