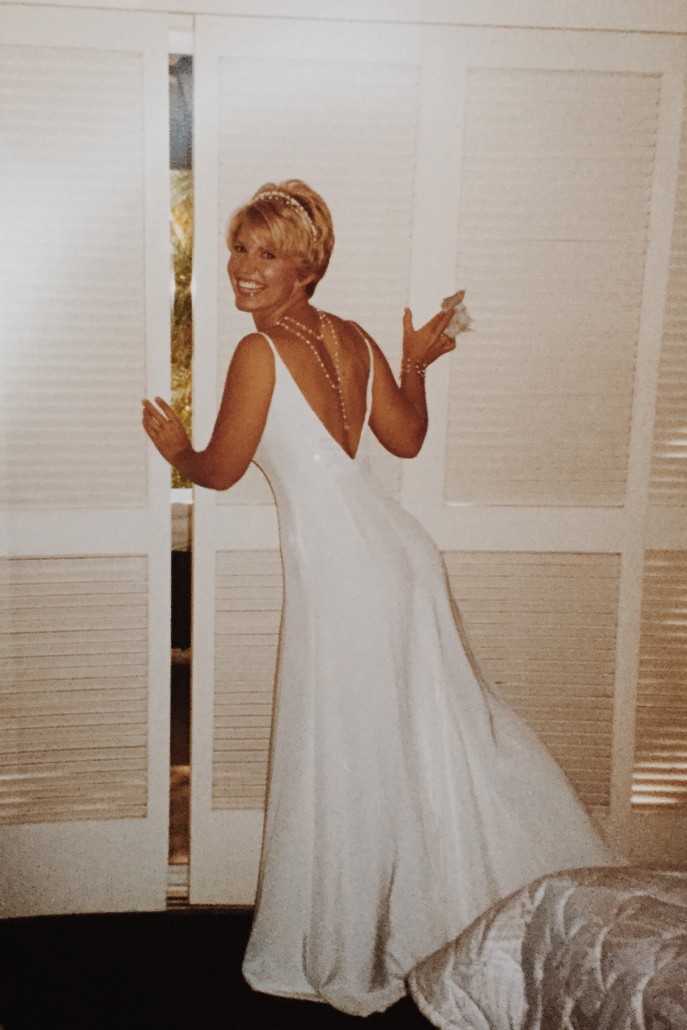 Here I am contemplating how to spend the .99 cents this dress will eventually fetch me.

I’ve been in a whirlwind since I landed last Wednesday  — one of the self-imposed variety.  I’ve driven three states staying in guest bedrooms along the way. I’ve filled my days with appointments, catch up sessions, and steaming mugs of morning coffee around kitchen tables.

I’ve snuggled babies I haven’t seen in months, cuddled up on couches with favorite 4-legged friends and talked myself hoarse with plans, projects, and everything in between. I’ve gotten goosebumps on my arms as dots are connected and laughed myself silly recounting past antics.

I’ve lain awake cursing jetlag and watched too many episodes of The Office at 3 am; passing time for a decent hour so I can head to the coffee pot. I’ve called lost property at Heathrow Airport three times, hopefully describing the necklace I left at security, wishing with all my might that it’s found. With the last phone call and a week having elapsed, I’ve pushed the sick feeling down in my stomach and finally accepted that it may be gone.

Whew! Just reading that makes me want to take a nap, but here’s the flipside to what I haven’t done. I haven’t sat at my computer and returned an email. I haven’t spent any time on my taxes, and I could really stand to clean out my car.

I also haven’t written a post for today. Which works out perfectly, because I have a better idea. Something I want to share with you as the next step in our getting to know one another process.

For the past few months I have been writing short snippets in time, both before and after my husbands death. Both before and after I found out he was a prolific dater during our marriage. If this is news to you, here’s a short summary to catch you up.

Writing these short pieces has helped me rediscover my voice as I begin to outline my memoir. But here’s the thing; my tale is not of his death, but of mine. It’s the story of the death of the girl that was willing to sell herself short. It’s the recounting of my struggle to say goodbye to the woman that embraced her false narrative of not good enough. Of how I am constantly digging deep and pushing through to my best version.

My circuitous path has been both shitty and great. My actions and behavior, the same. Rather than whitewash the rough parts, I want to stand up and own all of it. It’s all a part of me.

I hadn’t given my wedding dress a thought since I picked it up from the cleaners over two years ago. After paying some ridiculous amount of money to have it preserved, I shoved it in the back of the closet and shut the door. With the cost of the dress and the cleaning fee piled on top of it, it was officially the most expensive item of clothing I had ever owned. What a waste of money.

Now, having been in the throws of decluttering for weeks, its existence popped back into my head. Divesting myself of things is not only a beloved pastime, but this time a necessity; I was rapidly approaching a 2000-mile move from Florida back to Seattle. With an already jam-packed moving truck, selling the garment I wore to legalize the union with my dead, cheating husband was a win-win.

I dug around in the closet, unearthing the box containing my overpriced beaded gown. Ripping it open felt like disturbing a mummy’s tomb — a relic from another lifetime stirring up dusty memories. Peeling back the plastic, it appeared that the only preserved aspect was the 6-inches of faded mud stains along the bottom hem. Great. I frowned as I ran my fingers over the stains, my thoughts not of an emotional nature — I was thinking strictly of re-sale.

Regardless of the damage, someone was going to be damned lucky to score yards and yards of unblemished raw silk. Pleased with myself I slapped it on, took some headless (anonymous) pictures, posted the ad on eBay, and promptly forgot about it.

While logistical moving details had been keeping me busy, I was also moving at a frantic pace attempting to outrun the tidal wave of emotion which threatened to overtake me. I mean it makes sense doesn’t it? I had so much to deal with I knew if I slowed down enough for it to overtake me I didn’t know when I would get back up anytime soon.

So instead I was sprinting to outrun it. Well, sprinting and drinking. I kept a pretty solid buzz going for at least 6 months. Here I was in month 3, still firmly in the thick of it.

Five days after posting the dress, I roused myself early from the previous night’s activities of late night goodbyes. I’m fairly certain I was still drunk. Which is a lie. I was trying to sugar coat it. I was still drunk, period.

Wiping the sleep from my eyes I stumbled into my office and made my way to the laptop, the one remaining item in the room. The rest having been sold or already packed. I clicked through to my email and tried to focus with my bloodshot tired eyes. An email notifying me I had made a sale came into focus. My wedding dress had sold to the highest bidder the night before. Score!

I logged into my eBay account quickly scanning for the final sales price. $6.99 stared back at me. My eyebrows involuntarily raised and my mouth arranged itself in the shape of an Oh. For ten seconds I stood still, making no sound. Then I started laughing. Hard. Tears ran down my face. My brother ran into the room. Over the last 3 months I had become the unpredictable one of the family, needing to be checked on with frequency.

I gasped through my tears sputtering out “I didn’t set a minimum price, I thought maybe it would sell for a couple of hundred dollars.”

Really, I didn’t care, I only wanted it gone and put to use in some way. But here was the kicker. In addition to the sold notification, I also had a message from the buyer, a woman named Reba. Reba’s bio told me she was a seamstress in Arkansas. Reba had bought the dress to use for material. Congratulations Reba! Don’t forget I was still drunk and everything was still fuzzily ok, I still had an hour or so until the sobering up process was upon me.

I clicked through to Reba’s message and discovered she was a high-maintenance buyer. Apparently she was upset about my “inflated” shipping cost of $6.00. Reba was pissed about $6.00. She had just bought my wedding dress for 99 cents. She wanted proof that the shipping of my wedding dress made of raw silk was actually going to cost $6.00.

By this time I had run out of steam, the tears of laughter dried on my cheeks and my mouth started to tremble. It wasn’t about the dress; it was about the tidal wave. The one I had been carefully avoiding for months. It was looming close, trying to engulf me.

“What do I do?” I asked my brother. “She thinks I’m trying to cheat her and I’m not. Do I email her back and explain the cost?” I started to panic, heat spreading throughout my chest.

My brother gave me a long look. His eyes swept over me, assessing my trembling lip, noting the alarm in my voice. I’m sure he was trying to adjust to this new version of his sister standing before him. Not the drunk part, but my wild swing of emotions and the raw vulnerability on display.
His younger sister that stood in front of him clearly needing him, not really to deal with Reba. But in much bigger, more profound ways.

Finally in a calm, even voice he said “Here’s what we’re going to do. Take your dress, roll it in the tightest ball possible and shove it in an envelope. I’m going to take it to the post office. Reba just got the deal of the century. Do not waste your time responding to her. You don’t owe her anything.”

He was right. I didn’t. It was the first time I saw that making every Tom, Dick and Reba around me happy wasn’t necessary, and it was a revelation.