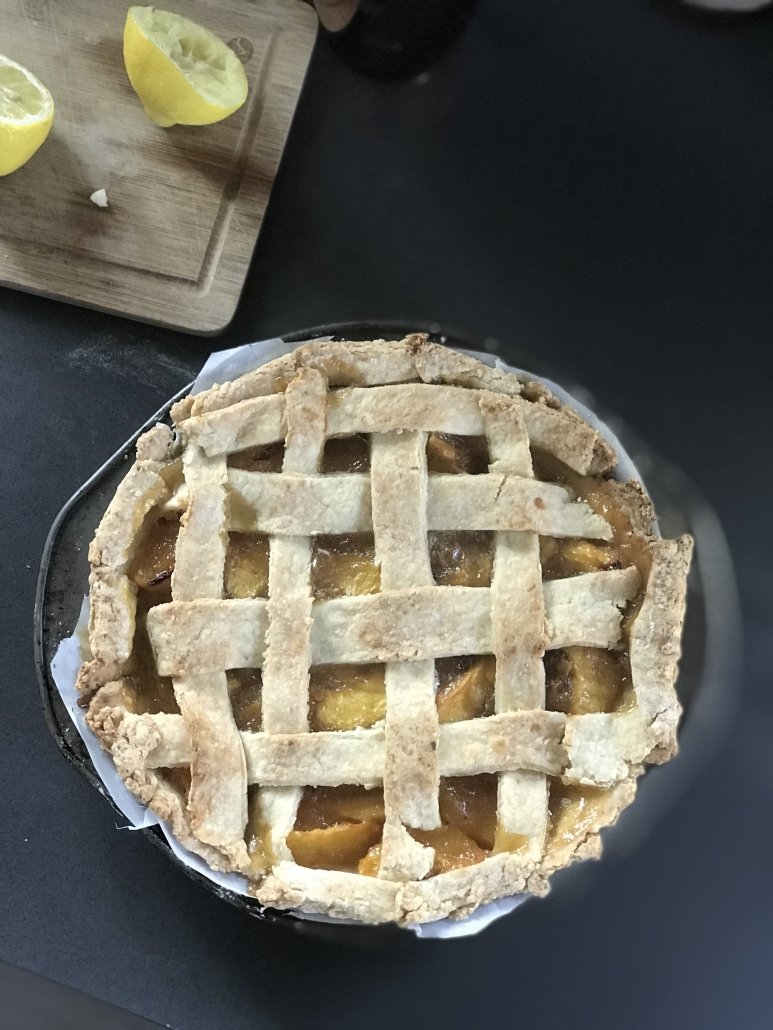 Making the Case for Being Happy, Now.

Driving home from the Fourth of July weekend in Northern California we stopped by a fruit stand and bought a flat of peaches. The yellow ones, not too fuzzy and bursting with juice that slid down my chin while I closed my eyes and conjured my childhood. In my mind’s eye, my grandfather stood in front of me holding his worn paring knife, juice dripping from his fingers, holding out the next piece for me. Just as he did so many summers in a row.

My Mom is the pie baker.

And an excellent one at that. Lemon meringue, chocolate cream, pumpkin, cherry, sometimes an apple would make an appearance. A pie on the counter was a common occurrence in our house and in my grandmother’s as well. Having never made a pie myself I decided these fuzzy gems were going to be my maiden voyage.

It took me all afternoon and I did my share of cajoling and sometimes begging the crust to hold together. It cracked in places it wasn’t supposed to and I ended up mashing the butter by hand. In the end I made what I call a frankencrust. Stitched together at the bottom of the pan and passing muster with a bit of a squeak.

I ate more than my fair share of peaches while I was peeling and cutting. The brown sugar I sprinkled over the bowl adding to my nostalgia while I prayed to the Crust Gods to not forsake me now. Baking is a meditation. When I want to do it, I’m submerged— using the time to lose myself in the simple motions. Not thinking too far ahead. The next item on my to-do list banished from the kitchen while I cut, sprinkle, knead and work the crust (but not too much!).

If we want to worry, we’ll find a reason.

Plenty of them. There’s always something to fret about. It’s like finding a loose thread on your favorite shirt. If you tug and pull on it, it’s going to come apart. But if you just leave it be, wear it out of the house and appreciate the shit out of it, it’s going to deliver for you.

There’s nothing. Not one thing preventing you from being happy now.

Baking on a Monday afternoon and being in the moment. Watching the trees wave in the wind from your living room window. Laying your cheek on a cool pillow and not letting your thoughts run wild to the time you had a fight on the playground when you were 8. Forget all that and shut the noise down.

“It isn’t what you have or who you are or where you are or what you are doing that makes you happy or unhappy. It is what you think about it.”– Dale Carnegie

Give yourself a vacation and slip into the happy. I’m over here with a slice of peach pie waiting for you.

The Rise of the Aperitivo: Taking A Page from the Italian Playbook

Stepping Out of the Fog
Scroll to top